An Overview and Tutorial

The amount of data generated each day from sources such as scientific experiments, cell phones, and smartwatches has been growing exponentially over the last several years. Not only are the number data sources increasing, but the data itself is also growing richer as the number of features in the data increases. Datasets with a large number of features are called high-dimensional datasets.

Principal Component Analysis (PCA) is a dimensionality reduction technique used to transform high-dimensional datasets into a dataset with fewer variables, where the set of resulting variables explains the maximum variance within the dataset. PCA is used prior to unsupervised and supervised machine learning steps to reduce the number of features used in the analysis, thereby reducing the likelihood of error.

Consider data from a movie rating system where the movie ratings from different users are instances, and the various movies are features. 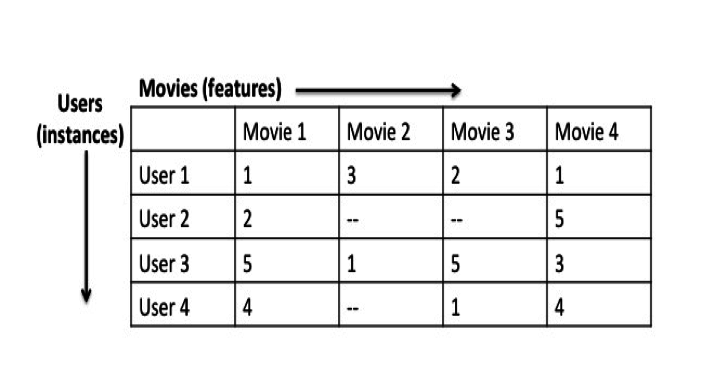 In this dataset, you might observe that users who rank Star Wars Episode IV highly might also rank Rogue One: A Star Wars Story highly. In other words, the ratings for Star Wars Episode IV are positively correlated with the ones for Rogue One: A Star Wars Story. One could image that all movies ranked by certain users in a similar way might all share similar attributes (ex. all movies with these ratings are classic sci-fi movies), and could ultimately be grouped together to form a new feature. 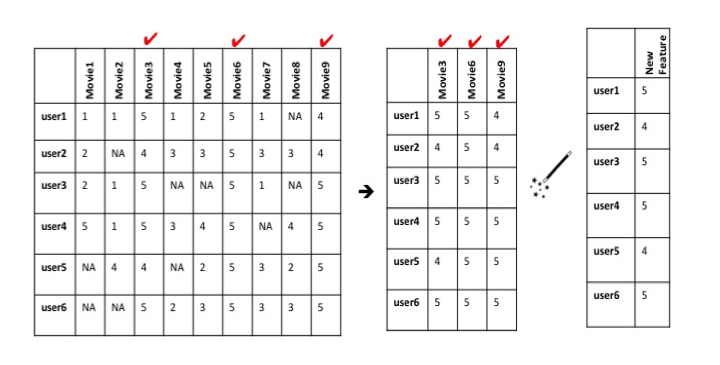 This is an intuitive way of grouping data, but it would take quite some time to read through all of the data and group it according to similar attributes. Fortunately, there are algorithms that can automatically group features that vary in a similar way within high-dimensional datasets, such as Principal Component Analysis.

The overall goal of PCA is to reduce the number of d dimensions (features) in a dataset by projecting it onto a k dimensional subspace where k < d. The approach used to complete PCA can be summarized as follows:

In this post, we'll use a high-dimensional movie rating dataset to illustrate how to apply Principal Component Analysis (PCA) to compress the data. This tutorial picks up after having created csv files from the data. If you want to pick up where this tutorial starts, you can find the pre-made csv files here.

First we’ll load the data and store it in a pandas dataframe. The data set contains ratings from 718 users (instances) for 8,913 movies (features). Even though all of the features in the dataset are measured on the same scale (a 0 through 5 rating), we must make sure that we standardize the data by transforming it onto a unit scale (mean=0 and variance=1). Also, all null (NaN) values were converted to 0. It is necessary to transform data because PCA can only be applied on numerical data.

The covariance matrix can be found as follows:

Alternatively, you can also create the same covariance matrix with one line of code.

The eigendecomposition can be performed as follows:

For example, if you were to plot data from a dataset that contains two features, the following illustrates that principal component 1 (PC1) represents the direction of the most variation between the two features and principal component 2 (PC2) represents the second most variation between the two plotted features. Our movies dataset contains over 8,000 features and would be difficult to visualize which is why we used eigendecomposition to generate the eigenvectors. 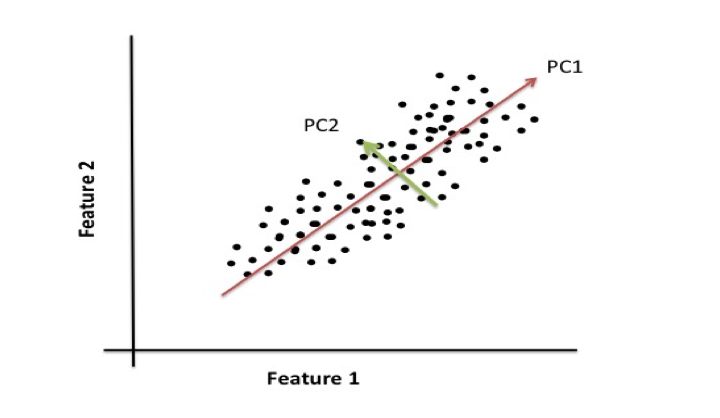 The eigenvectors with the lowest eigenvalues describe the least amount of variation within the dataset. Therefore, these values can be dropped. First, lets order the eigenvalues in descending order:

Our scree plot shows that the first 480 principal components describe most of the variation (information) within the data. This is a major reduction from the initial 8,913 features. Therefore, the first 480 eigenvectors should be used to construct the dimensions for the new feature space.